This photo shows more clearly the stove area, where two tiny "copper pans" hang from the wall, and shows the decorator "plate" above the breakfront.  On top are 1/2" "mugs," a "jar" holding a miniature "pair of scissors," and a "covered beer stein;" alongside, on the floor, is a case of "soda bottles."  On the table, along with the "banana" and "cereal box," are a "peach" on a plate, and a tiny knife.
"Victorian Dollhouse Kitchen"
© Leigh Harrison, 2012

The kitchen is the large room on the lower level.  When I acquired the dollhouse, it already had "wallpaper" which resembles tiles, and I added the "cast iron stove" (rear right), the green "breakfront," and tiny table and chairs.  On the table are a small plastic banana (3/4" long) and a very tiny box of corn flakes.  The "linoleum floor" is a piece of gift wrap paper in a pastel floral patchwork design.
"Victorian DollHouse / Outside Front View"
© Leigh Harrison, 2012

This beautiful dollhouse was built from a kit by my friend, Lorin Donadio, and her mother.  At present it boasts three large rooms, six windows, two stairways, two hallways, and a bathroom.  The removable chimney is not visible in this photo.
"Victorian DollHouse / Interior View"
© Leigh Harrison, 2012

I love this dollhouse because it's built on a revolving pedestal that makes it possible to view the dollhouse from the front or back easily, by turning it (gently) on the coffee table upon which it rests.
Building dollhouse rooms to a perfect 12:1 scale is fun for Leigh, but she also acquired a beautiful Victorian dollhouse from her friend Lorin Donadio, who passed away in November, 2017 of complications from multiple sclerosis.   Lorin was not only a dollhouse aficionado who had built the house with her mother from a kit, but was also one of Leigh's friends who had spent many years as a popular NYC pop and disco singer and performer.

The Victorian dollhouse is 22" wide x 17" deep x 39" high (including the removable chimney).  There are three large rooms, which Leigh has made into a kitchen on the first floor, a parlor on the second floor, and a nursery on the top floor.  The side spaces have been made into an entrance hall on the first floor, a stairway and hall on the second floor, and a bathroom on the top floor.

Here are photos of the Victorian dollhouse as it now appears from the front and back, and the interior of the parlor and kitchen.  More photos will be added as the rooms are fully developed.
* * *
This is a photo of the Victorian dollhouse parlor, showing the wallpapered walls, the floor covered by a crocheted "rug" (an antimacassar), miniature chairs, "table" (a slice of a geode on a 3-legged pizza separator), a tiny "birdcage" and a classic Victorian "fainting couch" along the right wall; beneath the "poster" (a greeting card, illustrated with Matisse's "Red Room.")  At the right rear is a tiny "model ship" (one of the wedding favors given as a memento at my niece, Sara's, wedding; Sara and her husband are both avid sailboat racers.)  Along the left wall are a "fireplace" with a "clock" encased in glass, and two fireplace "brooms" (actually toothpicks with wool or string.)
"Victorian Dollhouse Parlor / Rooms & Walls"
© Leigh Harrison, 2011
Victorian Dollhouse
Front and Inside Views
Victorian Dollhouse
Parlor
Victorian Dollhouse
Kitchen 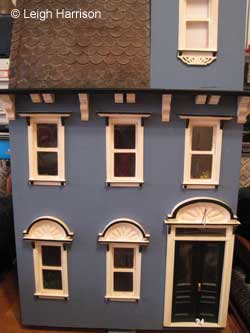 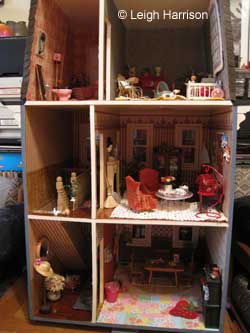 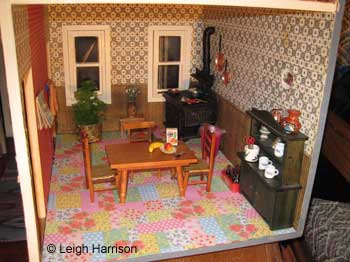 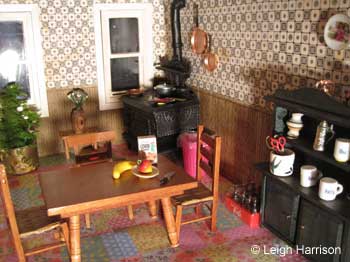 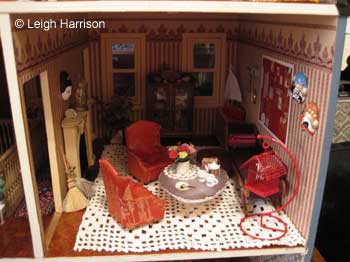 This page is dedicated to the memory of Lorin Donadio.