* * *
As a visual artist, Leigh has worked in numerous media, including watercolors, acrylics, pastels, cray pas, collage, 3-dimensional design and video.  Her paintings are watercolor fantasias, both surreal and pointillistic; her perfectly-scaled (1:12) dollhouse rooms are amazing depictions of serene, miniature decorating.

Leigh is also a photographer whose work documents some of her interests: the blues scene in NYC, large-scale murals, vanity license plates, nature (flowers, clouds, and wetlands), neon signs, and architectural details.  Leigh's photography session with Jonathan Kalb yielded his 2004-05 European tour poster photo, and she took the photographs used on the front and back cover of a spoken-word CD.

Leigh has exhibited her paintings in various art shows, including the Ward-Nasse Gallery's International Salon 1993, and her work has graced the covers and interiors of literary magazines including Medicinal Purposes Literary Review, Soul Fountain, and Asbestos Literary Arts Journal.  Leigh directed a video for Bobby Perfect's instrumental, "14th Street Shuffle," from his CD, "Shackles," which can be viewed on YouTube, or go to "Leigh on YouTube," right here on her website.

Her 9' x 30' mural of characters from children's books decorated the wall of a Queens, NY public school, and was designed and painted by Leigh with some help from the children of the public school where it was made.  Leigh is also a photographer and collagemaker, and -- as a longtime photographer of outdoor murals -- is a strong supporter of public art.

Leigh's studies at SVA (the School of Visual Arts, NYC) in Commercial Art with Roger Ferriter (creator of the L'Eggs stockings logo) as well as her classes with Carol Joyce in Textile Design (who -- years later -- was the author of the definitive book on the subject) led her to expand the themes of her own surreal and pointillistic watercolor work.

Her most recent project was as Art Director for her recently published
collection of poems, "From A to Zeus," in which she collaborated with the artist Rosie Rinsler on the cover and interior artwork.  Her current projects include a watercolor series on shoes. 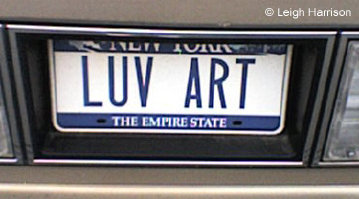 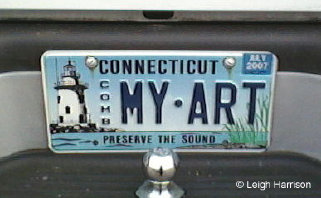