presents
Babes On Board
For many years, Leigh has supported important political, social, and artistic causes.  A few years ago, she decided to create a musical event to showcase and promote female-fronted bands.  The event is called "SongCrew presents BABES ON BOARD," and the 1st event was held April 2, 2015 at Desmond's Tavern in NYC.
SongCrew's Bobby Perfect believes that "any project that gives talented people a chance to perform is good!" &nbspLeigh adds, "we're also glad that we set the admission at $5 -- it's like a price rollback to what people paid to see a concert in the 1960s!"

The first two bands Leigh featured were Girls On Top (a 7-piece dance/party band comprised of six gals plus a male drummer) and Colibri (a funk/RnB/soul band, with a female vocalist, a female harmony singer, and female lead guitar player.)

* * * 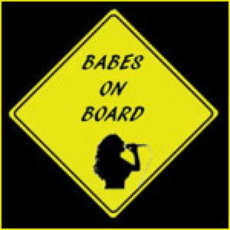 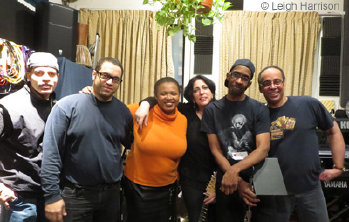 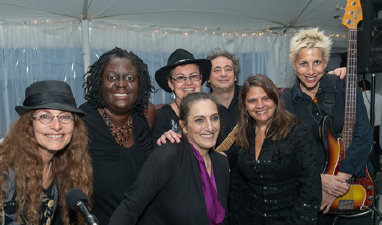 Photo Credit: Madeline Artenberg
Someone You Can X-Ray (L to R): Bryan Newman/lead guitar, Xavier Pietro/ percussion, Jon Clarke/bass, James Clarke/drums, Robert "Bobby" Pickett/violin, saxophone, Michael Ryan/percussion, Dana Newman/ld.vocals, harp, keyboards.
Blue Rhythm Sandwich (L to R): Bobby, Leigh, Lyall, Dave and Aaron, on April 15, 2016, at Desmond's Tavern, NYC.  To see a video of one of the band's mini-medley's, click the green button (on right).
Below are the two bands that performed at the 1st Babes On Board concert.
Here are the two bands that were featured at the 2nd Babes On Board concert on March 24, 2017 in NYC.
SOMEONE YOU CAN X-RAY
BLUE RHYTHM SANDWICH

It was so successful that another Babes On Board concert was held in March 2017, featuring Leigh and Bob's own band, Blue Rhythm Sandwich, along with their CT friends, Someone You Can X-Ray.  Currently, the Babes On Board events are temporarily on hiatus.  During this time, Leigh and Bob will be focusing on their individual recordings, their 2nd CD for their duo (BlueBird), and the various other groups they work with.

Since there are so many wonderful female-fronted bands out there, the next event will feature other excellent musical friends. &nbspAnd now the third concert is in the planning stages -- we'll keep you posted on the female singer-songwriters who will be taking part.

Mini-medley
"SongCrew presents Babes On Board," a female-fronted band extravaganza that Leigh is producing in NYC. The 1st & 2nd events were successful, and the next concert is being planned!